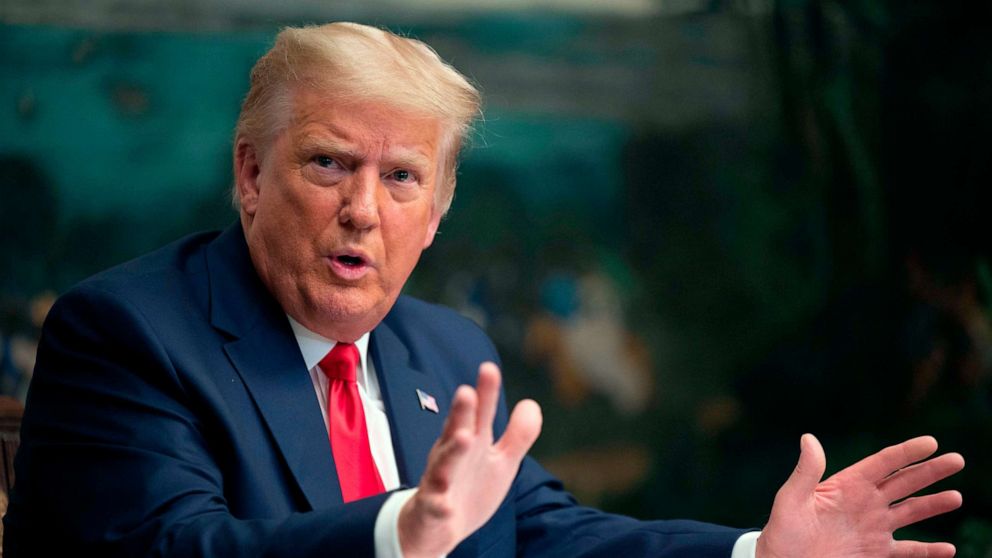 The president admitted he’ll leave the White House but dug in on conspiracies.

While President Donald Trump has begun to openly acknowledge the reality that his days in the White House are drawing to an end, he appears nowhere closer to acknowledging the legitimacy of his defeat.

Days after saying for the first time he would be moving out of the White House in January, the president made clear in his first television interview Sunday that he remained dug in, promoting an unfounded conspiracy theory that the election was stolen from him and that he intended to dedicate "125%" of his energy to proving it in the weeks to come.

“In other words, my mind will not change in six months," Trump said Sunday in an interview with Fox News’ Maria Bartiromo. "There was tremendous cheating here. Boxes were brought in. The mail-in vote is a disaster."

The president’s singular focus on his own political misfortunes threatened to jeopardize Republican control of the Senate, even as he acknowledged that his current path was a long shot. His attention on his own election has taken his focus off a pair of key U.S. Senate runoff races on Jan. 5 in Georgia, where Democrat wins would flip control of the body.

But in case after case, the president’s legal team has failed to advance his case of fraud over a basic failure to present evidence to support their claims.

After spending $3 million on a partial recount in Wisconsin that netted Biden 87 more votes, Trump and his allies are this week continuing to press a series of legal maneuvers that would not actually overturn the election results. Wisconsin's results were scheduled to be finalized Monday.

On Saturday, Pennsylvania's Supreme Court tossed out a challenge focused on mail-in ballots, brought by a congressional supporter of the president's, the latest adverse ruling for Trump and his allies as they have continued to try to challenge Biden's win in the key state. Biden received over 80,000 more votes than Trump did in Pennsylvania, which certified its results last week.

Trump's allies could appeal Saturday's decision to the U.S. Supreme Court, but even if they did, the Supreme Court would not be obligated to take it up.

States face a Dec. 8 deadline to finalize their results, before the Electoral College votes for president on Dec. 14.

On Monday, another swing state that Biden won, Arizona, certified its results. In the morning, Trump's legal team held an event with state lawmakers discussing the election results -- an attempt to undermine the vote that is not expected to have any real impact, since Arizona's legislature has no power over which electors the state would send to the Electoral College.

The president's look back at his own election appears to be pulling his attention away from Georgia runoffs, where Republicans are fighting to maintain control of the U.S. Senate.

Trump told reporters on Thanksgiving Day that he would "probably" travel to Georgia on Saturday to campaign for the Republican candidates, Sens. Kelly Loeffler and David Perdue. Otherwise, he has devoted few of his plentiful tweets to their elections.

Vice President Mike Pence visited Georgia a week and a half ago to campaign for them.

Instead, Trump has used his bully pulpit to slam Georgia's Republican governor, Brian Kemp, a longtime Trump supporter, as he has refused to echo the president’s baseless allegations of fraud in Georgia.

The president tweeted Monday that Kemp was "hapless" and should "overrule his obstinate secretary of state," Brad Raffensperger -- also a Republican backer of Trump -- after the latter has refused to intervene to help Trump.

"The governor's done nothing," Trump said in the Sunday Fox News interview. "He's done absolutely nothing. I'm ashamed that I endorsed him."

A spokesperson for Kemp said "Georgia law prohibits the Governor from interfering in elections."

"The Secretary of State, who is an elected constitutional officer, has oversight over elections that cannot be overridden by executive order," the spokesperson, Cody Hall, said in a statement.

Raffensperger said Monday that a machine recount in Georgia was on schedule to be finished by a deadline of midnight on Wednesday.

"There are those who are exploiting the emotions of many Trump supporters with fantastic claims, half-truths, misinformation," Raffensperger told reporters Monday, "and frankly, they're misleading the president, as well, apparently."